See it on Amazon.com

For other printed PEL works see our Publications Page

Vegetation of Wisconsin
The Vanishing Present 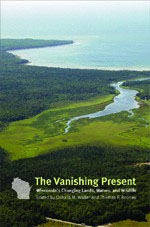 Straddling temperate forests and grassland biomes, Wisconsin contains prairie, savanna, wetlands, natural lakes, and rivers. But, like the rest of the world, the Badger State is undergoing urbanization and sprawl, population growth, and land-use change. For decades, industry and environment have attempted to coexist in Wisconsin-and this fragile balance of economic progress and environmental protection makes the state a fascinating microcosm of global environmental change.

The Vanishing Present brings together a distinguished set of contributors-including scientists, naturalists, and policy experts-to examine the direct and indirect effects of human population growth and development pressure on one's state's ecology. Straddling temperate forests and grassland biomes, Wisconsin contains prairie, savanna, wetlands, natural lakes, and rivers. But, like the rest of the world, the Badger State faces challenges in trying to conserve and sustain the natural systems we all depend on. The authors draw on exceptional records of ecological study to provide a revealing picture of the environmental changes occurring in temperate habitats around the world.

A fitting tribute to the home state of Aldo Leopold and John Muir, The Vanishing Present provides an accessible and timely case study of how ecological change should inform how we respond to environmental change.

Donald Waller is professor of botany and environmental studies at the University of Wisconsin-Madison.