How does a young scholar grow from a youthful focus on orchid seed physiology to documenting the vegetation of Wisconsin? John Curtis did just that, so we should look at how it happened. As a young man growing up in southeastern Wisconsin (see Burgess 1993 for a full biography), John Curtis was fascinated by the unique beauty and remarkable habitat requirements of the many orchids growing in Wisconsin's kettle moraine country. Over the next 15 years he took steps that led to the Plant Ecology Laboratory as a sustainable institution. 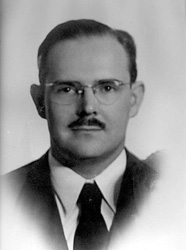 An early photo of John Curtis

With a strong problem-solving bent, Curtis wanted to grow and hybridize orchids horticulturally, but knew that their reproductive physiology would have to be worked out carefully for each species. Accordingly, his undergraduate work at Carroll College, and his doctoral studies at the University of Wisconsin focused on the physiology of orchid seeds and reproduction. His first university appointment was in 1937 as a plant physiologist at the University of Wisconsin in Madison (Burgess 1993). Forest Stearns and Grant Cottam came to Wisconsin in 1940 and 1941 for graduate work in botany, but at that time their advisor worked in plant physiology (see Cottam 1993).

Everything changed with the arrival of World War II. Cottam and Stearns were posted to the Pacific. John Curtis became the civilian research director of the Cryptostegia project in Haiti which had as a goal the mass production of latex from a fast-growing milkweed vine (after rubber plantations had been lost to the Japanese in Southeast Asia). The transformation of vegetation that was taking place in Haiti at the time made a huge impression on Curtis. Unique native species were being lost forever, especially the forest orchids, and introduced species were becoming dominants. The balance among species making up the natural communities there was seriously threatened (Curtis 1947).

When Curtis returned to Madison in 1946 he renewed relationships with many great scholars there and in the emerging field of plant ecology across the United States. Aldo Leopold was a thoughtful observer and writer about how biotic communities were organized, particularly those threatened by human activities such as land-use conversions and short-sighted wildlife management. Curtis who had seen serious land-use problems in Haiti came to share Leopold's (1949) broad concerns with how humans were degrading natural landscapes (Curtis 1956). He therefore turned his attention to how these forces were affecting the central United States. These new questions would require new knowledge, built from a very extensive new database.

A second major influence on Curtis at this time was the work of Henry Gleason who had tried to challenge earlier narrow use of the term "plant association" as an "organic and self-reproducing" field entity. The term, as used then, greatly inhibited ecologists' potential to understand and integrate the dynamics of species and populations into communities. Gleason had promoted use of the term "individualistic" for the composition of plant communities (Gleason 1926), but leaders in plant ecology in the1920s and 1930s trivialized his idea and forced him to leave ecology. (Gleason then focused his energies on plant systematics, where he found acceptance and lifelong success.) John Curtis corresponded with Gleason in the early 1940s and got copies of his papers. Curtis knew Gleason had been right, and knew also that he would have to have extensive data if he was to win what became known as the "continuum" battle through studies of the vegetation of Wisconsin. By the late 1950s, the Plant Ecology Laboratory housed all the remaining reprints of Gleason's ecology papers.

John Curtis's plan for a systematic study of vegetation throughout Wisconsin emerged in 1946-47. It was partly an extension of his proposal for studies of the "Great Lakes Forest of Wisconsin, Michigan, Minnesota, and Ontario," a John Simon Guggenheim Fellowship project that was to start in September 1942 (see Burgess 1993), but which was interrupted by the war work in Haiti. By 1946-47, Curtis saw that continuing financial support from the Wisconsin Alumni Research Foundation (WARF) could be arranged for graduate students, the returning WWII veterans. Numerous students were applying, including Forest Stearns, Grant Cottam, Bob McIntosh, Phil Whitford, and Robert Brown. Each of these worked on quite different questions, but each also emphasized a quantitative, hypothesis-testing or experimental approach whenever possible. Consistent with John Curtis's background as an experiment-oriented plant scientist, students and faculty readily accepted the term "Laboratory" for the ideas and expected 10 years of Wisconsin vegetation data. 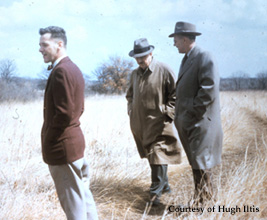 Although all the earliest students worked on forests or forest herbs, John Curtis's true love, personally, was the prairies. Here, species identification was often beyond the capabilities of new graduate students, and understanding the effects of historical treatment (or, in the case of fire, the absence of treatment) required an innovative, field experimental approach. A second cohort of graduate students such as David Archbald, Max Partch, John Butler, Orlin Anderson, and Bonita Neiland, eventually took on these grassland questions. Other students quantified relationships among soil-fungal, aquatic macrophyte, and lichen communities. Grant Cottam joined the group as an Assistant Professor in 1950 to add strengths in statistics and sampling methods. As reported by Cottam (1993), Curtis, and a few colleagues tried to spend one day every week in the field, looking for new study sites and taking data for the prairie continuum studies.

From the beginning, the Plant Ecology Laboratory was an institution that integrated a dual rationale: a physical place for study and data files, and a body of accumulated theory and understanding about how species relate to the natural environments of a region. Curtis wanted this knowledge to improve human use and enjoyment of those landscapes.

He also shared Leopold's vision for using the UW Arboretum as a laboratory to restore Wisconsin's natural plant communities (rather than the usual collection of trees). 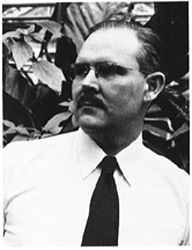 John Curtis at UW Botany Greenhouses
The 36 acre Curtis prairie there stands as the oldest restored prairie in the world. Curtis also collaborated with other nationally recognized figures including Henry Gleason, Paul Sears (Fig. 1), Stanley Cain, and others. Thus, the PEL's initial growth and impact clearly reflects the many talents of several students and colleagues as well as the determination and leadership of John T. Curtis.

Curtis, J. T. 1956. The modification of mid-latitude grasslands and forests by man. Pages 721-736 in W. L. Thomas, editor. Man's Role in Changing the Face of the Earth. Univ. of Chicago Press, Chicago, IL.

Leopold, A. 1949. A Sand County Almanac and sketches here and there. Oxford Univ. Press, New York.